“Most of the Mangyans could not even write their names. Often, they are being fooled whenever they sell their goods because they do not know how to compute,” Uybad told Bulatlat.com. He said that of the few who went to school, many did not even finish basic education.

“After talking with the leaders, I immediately started teaching,” Uybad said. His classes began in October 2007 in Kipalinay sub-village, Panaytayan, Mansalay town, Oriental Mindoro. He divided his students into four. The first group is composed of 23 children aged five to 11; second group has 37 youth aged 12 to 17 and the last group is composed of 22 adults aged 18 and above. His oldest student is 68 years old.

Later, Uybad became a volunteer-teacher under the Integrated Development Program for Indigenous Peoples (IDPIP) of the United Church of Christ in the Philippines (UCCP)-Southern Luzon Jurisdiction. He took seminars on teaching and school administration.

Luz Brozula, IDPIP director, said their program aims to improve the lives of the Mangyans. The program used to be called Mangyan Integrated Development Program (MIDP) established in 1988. In 2001, the UCCP drew up the lessons derived from the MIDP and decided to expand the program to cover the whole of Southern Tagalog and renamed it as IDPIP. It currently covers the provinces of Quezon, Rizal and Palawan, homes of the indigenous peoples in Southern Tagalog. 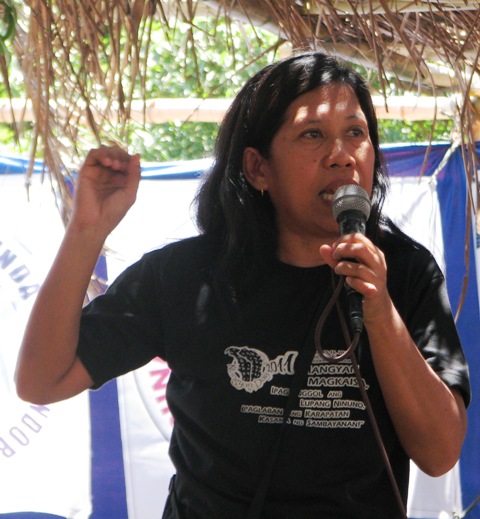 Luz Brozula, an NGO worker, has been serving Mangyan communities for more than 16 years.(Photo by Ronalyn V. Olea / bulatlat.com)

IDPIP links with people’s organizations and trains volunteer-teachers from among the Mangyans in the community. “The program is toward self reliance,” Brozula said.

The schools they built are products of bayanihan (community work). IDPIP provided the materials for the posts, all the others were contributed by the residents. The Mangyans themselves constructed the schools, with IDPIP giving them food for work. “For them, a day without work means no food,” Brozula said. “Rice, tuyo (dried fish), coffee and sugar is already a feast to them.”

Brozula placed the illiteracy rate among Mangyans at 60 to 70 percent. Those who attend formal education have to walk for hours to reach the nearest elementary or secondary school. Bringing baon (food for lunch) is another problem for many. They also experience discrimination for being Mangyans.

During schooldays, Jessa Mendoza, a 13 year-old Tadyawan-Mangyan, needs to get up at 4 a.m. to get on time for her first class at 7 a.m. Unlike most Mangyans, Jessa’s family has settled near town but she still has to walk one kilometer and a half to go to school.

Because her father works as a security guard in Naujan, Oriental Mindoro, Jessa is among the few who could go to a secondary school. To avoid being teased by her classmates, she takes rice for lunch, but often without a viand.

Brozula said students who attended IDPIP classes are more confident to go to formal school. She said that after taking evaluation tests from the Department of Education (DepEd), their students are even accelerated to Grade 2.

DepEd has recognized IDPIP as a non-formal school and regarded the program as part of the Alternative Learning System. “The DepEd could not reach the far-flung areas,” Brozula said.

Today, they have 15 schools all over the region, including ten in Mindoro.

While IDPIP focuses on literacy and numeracy, the program also provides lessons in agriculture, nutrition, sanitation and hygiene and health education.

The Mangyans used their acquired skills in their livelihood. “Before, when a merchandiser shows them a piece of paper with numbers, they would get confused. Now, they know if the computation is correct,” Brozula said.

Knowledge on health has also reduced the number of deaths among the Mangyans. Brozula said that there was a time when 50 children in one community died of measles.

Brozula said the Mangyans can now exercise their right to vote. She said that during elections, politicians used to herd Mangyans in a truck, give them rice and sardines. Politicians’ men would be the ones to write down the names of the candidates on their ballots. Mangyans comprise 20 percent of the population in Mindoro and are thus significant in elections.

“They have learned how to assert their rights,” Brozula said. They write petitions to local government units regarding their plight.

The schools, said Brozula, are managed by people’s organizations. The schools have become centers of community affairs. “Their leaders hold meetings in schools. Other activities are also held there.”

Mangyans have organized themselves in defense of their rights.

Cora Senigman, an Alangan-Mangyan from Baco, Oriental Mindoro said they established their local organization to address their land problem.

Rowena Lindog, a Tadyawan-Mangyan from Soccoro, Oriental Mindoro, stressed the importance of organization. “If there is an organization, our sentiments will be heard. Politicians are compelled to listen to us because of our sheer number. If you are alone, you would be ignored,” she said.

Lindog said that problems are resolved within the organizations. “We learn from each other and find solutions together.”