NPA Commander Parago, Confident of the Advance of the Revolution

“This is not a war between the military and the NPA but the struggle of the masses for genuine change and democracy.” – Leoncio Pitao alias Commander Parago

New People’s Army (NPA) leader Leoncio Pitao alias Commander Parago sits beside his assault rifle and army pouch a few meters away from the main road. Some of the guerrillas rest on hammocks; another busily prepares food. Hidden by a nipa hut, trees and bushes, Pitao and his armed troops patiently wait.

The detached squad belongs to the First Pulang Bagani Company (1st PBC) of the NPA’s Merardo Arce Command-Southern Mindanao Regional Operational Command of the NPA, one of the military’s most wanted rebel groups in the country. Pitao and his men are ready to make an attack at the target mining truck once it approaches.

As a policy, the NPA opposes foreign and big local companies’ mining operations ushered in by the passage of Mining Act of 1995. Asserting that these operations result in large-scale plunder of natural resources causing wanton destruction of the environment and benefiting only the multinational firms, the NPA vows to put a stop to large-scale mining practices as far as its revolutionary power and influence could reach. 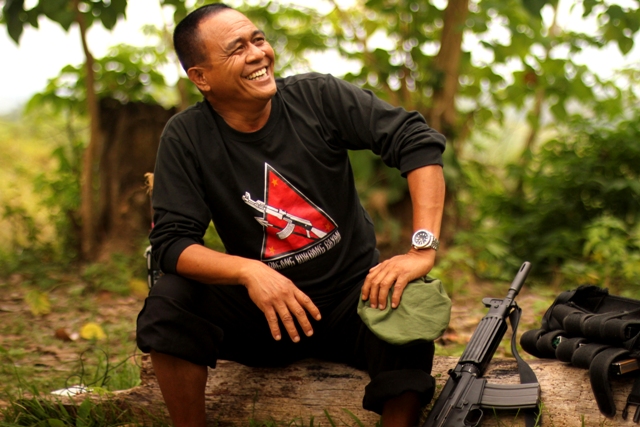 Meanwhile, Pitao laments the entry of mining firms in the provinces of Davao. He claims that multinationals pay money to government officials down to the barangay (village) chairman to make way for the approval of mining permits. The Department of Environment and Natural Resources’ (DENR) Mines and Geosciences Bureau (MGB) recently announced the approval of 247 mining permits under the Aquino administration.

“We are ready to set their trucks and equipment on fire if they enter our territory. They have no business here,” the NPA commander says. Meanwhile, peasant and indigenous groups from Mount Diwalwal and other priority areas opened up for mining continue their demonstrations in the city of Davao.

On March 17, an oversized platoon of the 1st PBC-NPA raided the Panabo headquarters of the Philippine National Police (PNP), killing two police personnel, wounding two others and seizing an M-16 rifle. Pitao said the punitive action highlights the “resolve and determination of the people’s army to continuously hold the initiative by successfully countering the anti-people and pro-big business and mining armed aggression of the 10th Infantry Division of the Armed Forces of the Philippines (AFP) and the PNP.”

Becoming legendary among the local people for eluding years of intensive manhunt by his enemies, Pitao, who hails from a poor peasant family in Davao del Sur, has been waging war with the Maoist rebels since martial law. He recounts how military men hit his innocent father in front of him and his family and his realization of that the government is abusive.

The 52-year old Pitao took up arms and joined the armed revolution in November 1978. He warmly recalls his military training as a member of the NPA in 1980 which he underwent with ‘Ka Oris’; he was young and single then.

His 32 years as a guerrilla fighter, however, was never easy; he has weathered the worst attacks of his enemies.

“I wanted to eat ‘biko’ (rice pudding); and it gave me away.” Pitao talks of how he was taken by the military on November 2, 1999. Coming from a plenary of the communist rebels in the region, he arrived at their house. At that time armed soldiers were already holding his family at gunpoint, forcing him to surrender.

He was incarcerated for 22 months and released in September 2002 following a high-profile campaign led by progressive groups. Upon his release, he went around giving talks with different sectors in urban cities before going underground again.

The most brutal and enraging act that Pitao’s enemies have done to him was the brutal killing of his 22-year old daughter. A grade school teacher, Rebelyn was abducted, tortured and killed on March 5, 2009 by suspected members of Military Intelligence Group (MIG) of the AFP.

Two years after, the case remains unsolved and Pitao blames the government for the injustice. The police points to the lack of witness as major hindrance to resolving the case. But revolutionary justice was met at the least, Pitao believes.

“Seems like we have avenged her death,” Pitao says in the local dialect. Some of the names included in the Merardo Arce Command indictment were executed. The most recent perpetrator punished by the NPA was Cpl. Helvin Bitang on March 4.

His enduring years with the NPA earned him the title ‘tatay’ (father), as the local masses in the guerrilla zones fondly call him; perhaps the same reason why Pitao eludes arrest. 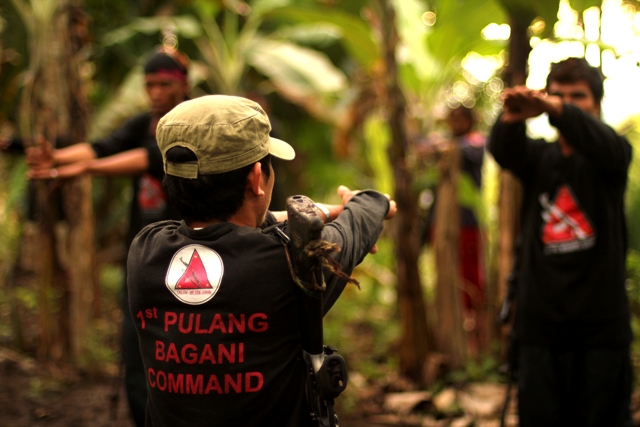 “He has our respect, he has the resolve to lead the revolution, and the masses love him for his unfailing commitment and determination to defend the poor who are being abused by the military,” a mother says of Pitao.

Local masses admit they are friends with the guerrilla leader.

“In my opinion, Commander Parago is good because poor peasants can rely on him. He defends and gives protection to the masses,” another mother testifies.

The same adulation by the masses inspires Pitao.

“There is no basis for us to lose; the masses are ever prepared to fight. This is not a war between the military and the NPA but the struggle of the masses for genuine change and democracy,” Pitao says.