MANILA — Immediately in the wake of announcements that at least 6,000 American troops will be arriving in the Philippines to participate in the Balikatan joint military exercises, an alliance of peasant groups and their supporters from ecumenical formations declared their opposition. The farmers groups said that the presence of more military forces in the areas where the exercises will be held is certain to result in more human-rights violations against civilians. They also said that farmers will be facing renewed threats of eviction.

The public affairs officer of the Balikatan exercises representing the Philippines, Maj. Enrico Gil Ileto, recently announced that the American troops will join 2,000 Filipino soldiers in a series of exercises beginning April 10. For the next 10 days, the combined forces will hold exercises at the headquarters of the Armed Forces of the Philippines’ (AFP) Western Command (WESCOM) in Puerto Princesa in Palawan.

Field training exercises will be held in various training sites, namely in the Fort Magsaysay Military Reservation (FMMR), the headquarters of the Army’s 7th Infantry Division and Special Operations Command in Nueva Ecija; Basa Air Base and Clark Air Base, both in Pampanga; Crow Valley Range in Tarlac; Naval Station L. Gantioqui in Zambales; Sangley Point in Cavite City; Marine Base Ternate in Cavite; and in Mactan Air Base in Lapu-Lapu City.

“Exercise Balikatan 2011 is a great opportunity to conduct training which is vital in maintaining the readiness and interoperability of the AFP and U.S. Armed Forces,” said Armed Forces chief of staff Eduardo Oban Jr., according to a report by the Philippine Information Agency. The report said “the conduct of Balikatan allows a long and lasting partnership, founded firmly on common heritage between two freedom-loving countries committed to the preservation of liberty and democracy.” 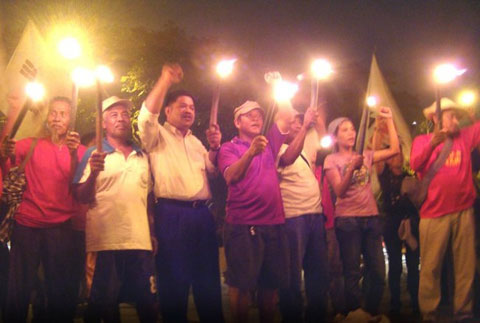 A local peasant group said that military exercises in the FMMR should be banned the same way that the whole Visiting Forces Agreement (VFA) that allows said exercises should be scrapped. The Alyansa ng Magbubukid na Nagkakaisa sa 3,100 Ektarya ng Fort Magsaysay Military Reservation (ALMANA 3,100) has been campaigning against military interference in the 3,100 hectare land, while the residents in the military reservation have been fighting for their right to own the land since the 1960s.

As early as the 1930s, farmers were already cultivating the lands at the area of the FMMR, which covered 73,000 hectares in its entirety. As stated in Proclamation 207 issued in 1955 by then president Ramon Magsaysay, the whole reservation crosses Nueva Ecija, Bulacan and Aurora provinces. Even back then, the lands were site used for military exercises, bombing runs and other military activities.

In the 1960s, it was the AFP who took the role of landlord in the FMMR, collecting rent from the farmers in the form of two to three cavans of rice per farmer.

Through the years, many legal battles have erupted as various private groups and individuals staked their respective claims on the land. The issues of ownership and jurisdiction over the 3,100 hectares was finally decided through the release of a Deed Of Transfer from the DND to the DAR signed by then DAR Secretary Benjamin Leong and former DND Secretary Renato de Villa on November 5, 1991. The deed was signed after the release of executive orders 407 and 448 (series of 1990).

In the deed of transfer, the 3,100 hectares were identified as being located in San Isidro, Laur town of Nueva Ecija province. DAR officials were mandated to coordinate with camp officials in surveying the land to define exact location and boundaries.

It was stated also that a buffer zone of 20 meters around the camp will be set and no permanent structures will be built for security purposes, and that the DAR has responsibility and jurisdiction over any and all judicial or quasi-judicial issues that may arise.

Most importantly, it was stated in the deed that the transfer was free — both the transfer from the defense department to the agrarian reform agency, and from the latter to the legitimate farmer-beneficiaries

Despite the existence of the deed signed by two department Secretaries, the military, particularly the PA 7th Infantry Division, did not relinquish jurisdiction over the land. It was even reported that a commander, Maj. Gen. Ralph Villanueva, even sent a letter to the Provincial Agrarian Reform Office to cancel all CLOAs involving the 3,100 hectares.