A certification from the Sandiganbayan anti-graft court showed that “no criminal/civil case had been filed” against former agriculture secretary Cito Lorenzo and former agriculture undersecretary Jocelyn “Jocjoc” Bolante, in connection with the P728-million fertilizer fund scam. “Clearly, Gutierrez did not lift a finger to take action against the officials tagged in the fertilizer fund scam,” Danilo Ramos of farmers’ group KMP said.

MANILA — It is not just the cases of corruption in the Armed Forces of the Philippines (AFP) that embattled Ombudsman Merceditas N. Gutierrez allegedly ignored and dismissed, there were also the complaints filed by farmers and peasants regarding corruption cases involving Malacañang.

As the House of Representatives gears to transmit the impeachment complaint against Ombudsman Gutierrez to the Senate anytime next week, signatories to the complaint said they are determined to pin down whom they described as a “shamelessly corrupt” official.

Kilusang Magbubukid ng Pilipinas (KMP) secretary-general Danilo Ramos, a signatory to the impeachment complaint filed by Bayan Muna and a witness to the P 728-million ($16.785 million) fertilizer fund scam, said more farmer victims and complainants to the 2004 fertilizer fund scandal are willing and eager to give their testimonies on the issue. He said farmers want to tell the impeachment court of Ombudsman Gutierrez’s refusal to address the plunder complaint they filed against former president Gloria Macapagal-Arroyo and other officials of the previous administration.

“We are well-prepared to meet Ombudsman Gutierrez head-on and call her a liar to her face,” Ramos said.

Ramos said peasant leaders and witnesses from Panay Island, Central Luzon, Cagayan Valley and other parts of the country have signified their intention to testify once the Senate transforms itself into an impeachment court. 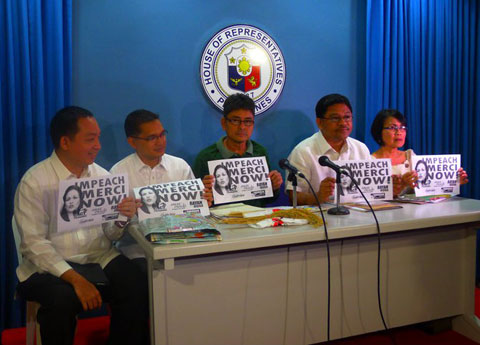 In a separate report, the KMP said that the P728-million fertilizer fund scam issue has hounded their leaders and members who testified that there were no fertilizer subsidies awarded to any member of their group.

KMP-Panay leader Nilo Arado and KMP-Pampanga leader Ofelia Rodriguez were abducted and killed, respectively. Arado was abducted on April 12, 2007 in Oton town, Iloilo, by alleged members of the military. He was a witness at the Senate hearings earlier in 2006. He testified that there were no farmers under PAMANGGAS–Panay (KMP-Panay) awarded with fertilizer subsidies.

Rodriguez appeared in a public affairs program and granted an interview saying she never received any fertilizer subsidy. Consequently, she was killed on January 16, 2005 in Mexico, Pampanga, by alleged military agents.

“This is a sickening situation. Those who steal public money continue to enjoy lavish and comfortable lives, while we peasants, already marginalized, are used to justify the fertilizer fund scam. Two of our leaders were killed after they testified on this issue. Is it any wonder that we are determined to find justice and closure to this issue?” said Ramos.

“We religiously followed the status of these plunder complaints, but the Ombudsman did not act on them. We know that there is a level of incompetence in the office, but this is different because the complaints were on controversial issues and these were deliberately ignored,” he said.

Ramos himself was the principal witness of the Senate inquiry on the fertilizer scam and became a target of political persecution.

In a press conference held recently, Ramos revealed a certification from the Sandiganbayan anti-graft court that “no criminal/civil case had been filed” against Lorenzo and Bolante.

“Clearly, Gutierrez did not lift a finger to take action against the officials tagged in the fertilizer fund scam,” he said.

The certification, signed by lawyer Renato Bocar, executive clerk of Court IV, was issued to Ramos on February 25 a day after he filed a request.

Pamalakaya filed the first plunder and criminal complaint before the Ombudsman on February 14, 2006, in connection to the Rapu-Rapu oil spill in Albay in 2005, the offshore mining in Tañon Strait and the distribution of more than 4,000 environmental compliance certificates by then Department of Environment and Natural Resources (DENR) Michael Defensor in 2005.

The second plunder complaint was filed on January 6, 2011, this time on the issue of overpriced procurement of 98 ice-making machines with public funds amounting to P 455-million ($10 million).

In the more recent complaint, Pamalakaya and Anakpawis Partylist Representative Rafael Mariano and then-representative Joel Maglunsod charged former president Arroyo, then Department of Agriculture secretary Arthur Yap and 13 others with plunder and criminal and administrative suits.

In their 16-page plunder complaint, they said Arroyo, Yap and officials of National Agribusiness Council (NABCOR), members of Awards and Bids Committee and the owners and operators of Integrated Refrigeration Service System (IRRS) violated Republic Act 7080 or the Anti-Violation Plunder Law, Republic Act 3019 or the Anti-Graft and Corrupt Practices Act, Republic Act 6713 or the Code of Conduct and Ethical Standards for Public Officials and Republic Act 9184 or the Government Procurement Reform Act for grave misconduct.

The complainants said the agriculture department, through NABCOR, awarded the government contract to a lone bidder — the IRSS — on September 2, 2009, to provide the ice-making unit at P 4,650,000 ($107 thousand) per unit, or about P2.3 million ($43 thousand) higher compared to prevailing industry price for the ice-making machine.

Pamalakaya and Anakpawis Partylist asserted that the anomalous P455-million ice-making machine deal was chiefly brokered by Arroyo and Yap.

Based on reports, the ice-machine contract stipulates that the government will pay IRSS P455,700,000 for 98 units of ice-making machines with liquid freeze capability, which will be supplied to select municipal fish ports nationwide.

The complainants, however, said the government can obtain 98 units of ice-making machines for P225 million to P 230 million ($4.3 million), or half of the quoted and agreed price with IRSS.

The groups said that under Republic Act 9184 (Procuring Law), Section 37.1, the bidder must submit a copy of its single largest completed contract over the past 3 years, and such condition is impossible for IRSS, which was only incorporated a day before the preliminary bidding. The contract was finally awarded on September 2.

“We filed very compelling cases, but Gutierrez snubbed her nose at them. It is an outrage that she has been allowed to stay in office for this long. She has used her position to protect the corrupt and ensure that no case against them prospers. She should have been impeached long ago. Congress should not miss this opportunity of sending this corrupt official to stand trial,” said Hicap.