Lessons from the Failure of the MOA-AD

MANILA — The chairman of the then Government of the Republic of the Philippines (GRP) peace panel during the collapse of the talks with the failure to sign a Memorandum of Agreement on Ancestral Domain (MOA-AD) laid down lessons he deemed important in resolving the Mindanao conflict.

“Circumstances prevailing at that time contributed to the failure [of the MOA-AD],” he told the audience, citing the very low trust rating of former president Gloria Macapagal-Arroyo. “A government that did not enjoy the people’s trust could never convince the people that the agreement [she would sign] would be for the interest of the people.”

The Supreme Court declared with finality that the MOA-AD is unconstitutional. 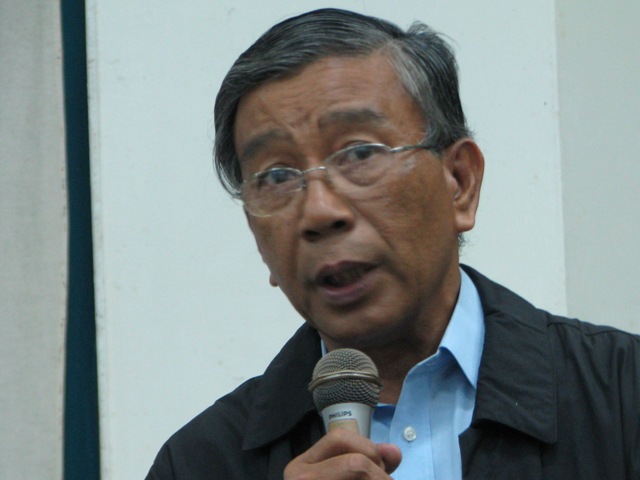 “The MOA-AD is dead but its substance could still be a guide or be incorporated in a final peace agreement,” Gen. Rodolfo Garcia, former chairman of the government peace panel, says.(Photo by RONALYN V. OLEA / bulatlat.com)

Garcia said lies were peddled against the MOA-AD to generate fear among the public. Among these lies, he said, include confiscation of land, separation of territories and that those living within the ancestral domain of the Bangsamoro people would be subjected to the “harsh Sharia law.” “All of these are not true. They are borne out of historical biases that persist to this day. There would always be detractors as there is a sore lack of knowledge of the historical roots of the problem that have led and sustained the Moro rebellion,” he said.

Garcia clarified that the MOA-AD is not the Final Peace Agreement (FPA) but an interim agreement. He said they planned to conduct 15 months or so of negotiations after the MOA-AD toward a comprehensive compact.

“I want to express my regret that during the course of hearings on the MOA-AD, I heard no strong arguments from the government through the solicitor general defending the agreement,” Garcia said, calling the inaction a hasty retreat. “Six years or so [of negotiations] were flushed down the drain.”

Another lesson, he said, is clarity of language. “Our language engineering did not really succeed much,” he said. “To many, especially the Supreme Court, the phraseology was vague. The provisions were stated in general terms,” he said, adding that it was an agreed consensus that the specifics could be discussed during future negotiations.

Garcia deemed that while the MOA-AD is dead, its substance could still be a guide or be incorporated in a final peace agreement.

The former GRP peace panel chairman also said that there is a need to address the agreement with the Moro National Liberation Front (MNLF), citing additional territory, share in natural resources, enhanced measure for self-rule and governance, among others.