According to Alonsagay, a certain Braganza of the 84th Infantry Battalion of the Philippine Army asked the residents who organized Todifa. The said soldier also told Todifa members that they should stop attending the meetings of the group.

Two months later, the soldiers came to Alonsagay’s house again. This time, they asked from Alonsagay the “master list” of Todifa members.

Peter Villa, another Todifa member, was taken by the soldiers last November and forced to admit that he was an NPA.

Villa said a soldier brandished a knife and rubbed the blunt side of the weapon on his nape while he was being questioned.

Another incident of military harassment reported by residents happened to a 17-year-old girl. The girl, identified only as “Amanda” to protect her identity, had not returned home since September last year. A soldier was said to be wooing the girl and later on asked her to pay a visit at the detachment. It was in these visits, according to the mother, that the girl was forced to admit that she was an NPA.

The Davao City based-10th Infantry Division of the Philippine Army claimed that the girl has surrendered to them on September 14.

“The soldiers, no matter how else they pretend to be, do the same tricks of terror,” Alonsagay said.

“We are just as happy there are organizations like EJP coming to us in times like these. It gives us a certain sense of security knowing that there are groups we can call on for help,” she added.

Aside from free medical services, the “Peace and Human Rights Tour” being organized by the EJP also provides human rights education to residents in the areas they serve. 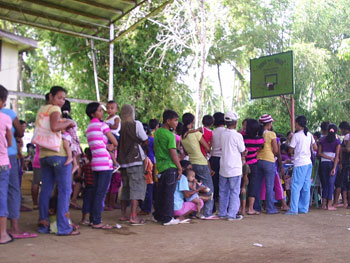 Toril residents line up for free health services from the EJP. (Photo by davaotoday.com)

Bishop Callao said this is important since human rights abuses of the same brutality are still being committed against villagers in areas where armed conflict occurs in spite of the announced “shift of approach” of the Philippine Armed Forces from armed to “civic military operations.”

These, according to Callao, are human-rights abuses such as endangerment of the lives civilians by military occupation of communities, harassment and tagging of residents as supporters of the NPA, coercing them into admitting that they are members of the NPA, and even bribing them with money to get “confessions.”

The EJP, according to Callao, as part of its advocacy for peace, is pushing for government to answer first long standing issues of economic exploitation and social degradation to solve the armed conflict.

“The government must focus on where insurgency takes root, rather than spending most of its funds on costly military expeditions,” Callao said.

He pointed out, that as a proof, the current administration has doubled its military budget for 2011 and is even planning to beg for more military assistance from the United States which has a record of pouring out millions of aid to the country for counter-insurgency program.

As an output, the EJP set up Peace and Human Rights Committees in the areas where the mission had been conducted. — Davaotoday.com