A Family of Martial Law Victims

MANILA — Romeo Luneta was only 19 when he joined Kabataang Makabayan (KM or Patriotic Youth). He was a student at the University of the Philippines College of Agriculture in Los Banos, Laguna, when he was arrested in October 1972.

“Elements of the MIG [military intelligence group] arrested me. There were no charges, only Marcos’s Asso [arrest and search and seizure order],” Tatay Romy, as he is fondly called by colleagues in the human rights community, said.

Former dictator Ferdinand Marcos declared martial law the month before. From that day on until almost four years, Tatay Romy was detained at the Camp Vicente Lim in Canlubang, Laguna. He was made to endure all sorts of ill-treatment and torture. 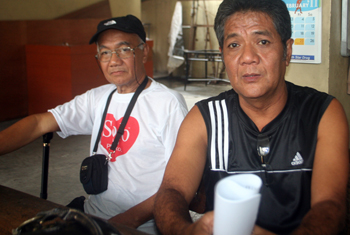 “Naked, they electrocuted me. Naked, they beat me up. I have chosen to forget the details because it still pains me,” Tatay Romy, now 68, said in an interview.

On Dec. 22, 2010, Tatay Romy was among those who received a letter from a United States court, informing him about the claims he would receive. (see related story) For him though, no amount of money could ever compensate for what he and his siblings suffered during the dark years of the dictator’s rule.

Tatay Romy said he was arrested by the military on the belief that he was Jose or Pepe, a younger brother, who, according to the military, was then a high-ranking member of the Communist Party of the Philippines (CPP). Five other siblings Ernesto, Domingo, Maxima, Franco and Francisco were also activists. Tatay Romy was the first to be arrested.

On April 12, 1974, Franco’s wife Margarita and two-year-old daughter Ningning were among the eight individuals who were abducted by state agents in Cabanatuan, Nueva Ecija. They remain missing to this day.

When asked about the torture, Francisco just said: “All types of [kawalanghiyaan] cruelty.” But Francisco said their brother Ernesto suffered the most.

“Hands tied, he was drowned in a swimming pool. The torturers would revive him and repeat the process over and over again,” Francisco said. “They would also pour hot water on him, followed by cold water that made his body shake involuntarily,” he added. Long after Ernesto was released from prison, Francisco said, his brother’s legs still trembled.

Ernesto was beaten up repeatedly to the point that his legs and arms became bloated, said Francisco.

Ernesto died last year. Domingo died in 2007. Only five of them, including Maxima, Franco and Pepe are still alive.

When he received the news about the claims, Tatay Romy said, he welcomed it. “Our struggle for justice is far from over; I would use it for that,” he said. Now 68 years old, Tatay Romy has diabetes and hypertension; he takes 12 types of medicines per day. He needs to spend P3,500 ( $78) a month for his medical expenses.

Tatay Romy said no amount would be enough to compensate for the crimes of the Marcoses. “If they [Marcoses] would be punished, our sufferings would not be for naught,” he said.

But the Marcoses are back in power. “They are rich. They can buy votes,” Tatay Romy said.

While Tatay Romy and Francisco support the call of the Samahan ng Ex-Detainees Laban sa Detensyon at para sa Amnestiya (Selda) for the immediate passage of the compensation bill for the victims of martial law, Tatay Romy said, he bears no illusion that President Benigno S. Aquino III will render justice to the victims.

“He, like the Marcoses, belong to the ruling elite. They wish to preserve the status quo,” Tatay Romy said, adding that Aquino is also implementing a repressive counterinsurgency program. “Aquino has been in power for less than a year and yet, many activists have already been killed,” Tatay Romy said.