‘It’s Not Too Much to Demand Justice, to Demand Land for the Landless’

Mendiola Massacre survivor Teresita Arjona, whose husband Danilo died with 12 others in the carnage, vividly remembers what happened that day 24 years ago. She is unlikely to ever forget, she says, because the reasons why they marched to Malacañang then are the same reasons why farmers continue to hold protests and rallies and why so many others have been killed.

MANILA — When farmer and activist Danilo Arjona was killed on January 22, 1987, he left behind a wife and five children. He was shot in the head and the bullet passed through his skull cleanly. It’s a detail that remained in his widow’s memory for the last 24 years.

Danilo’s widow, Teresita, or “Nanay” Tess, can only be comforted by the knowledge that her husband’s death was not ordinary – “Namatay siyang nakikibaka para sa lupa,” she says simply, and even as her smile is sad, her eyes light up in pride.

Two decades have past but Nanay Tess vividly remembers what happened that day. She is unlikely to ever forget, she says, because the reasons why they marched to Malacañang then are the same reasons why farmers continue to hold protests and rallies and why so many others have been killed.

“There were no signs that violence could erupt,” Nanay Tess says. Contrary to the assertions made by police and military men who testified in the 1987 People’s Commission on the Mendiola Massacre established by the Cory Aquino government, she says that the farmers did not shout slogans demanding blood and violence. 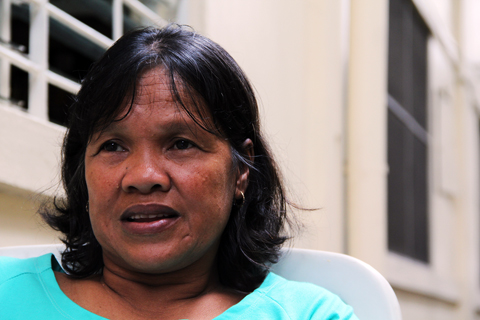 Teresita Arjona says she could never forget that day. (Photo by Jo A. Santos / bulatlat.com)

“Everyone was shouting the usual slogans calling for genuine agrarian reform and land for the tiller, but no one was calling for violence. If I had any idea that there was going to be violence, Danilo would not have let me come, much less bring my mother with me,” she explains. Danilo, she remembers, was a marshal during the rally, and as such she did not join him in the frontlines.

She says his last words to her were instructions. “He told me to stay put and not wander around. He didn’t want my mother and I to get lost in the crowd. There were so many of us there, and I didn’t want to get lost either so I obeyed,” she says. She kept in the middle part of the throng and from there she could clearly hear and even see what was happening in the front. She saw that there were many men in military and police uniforms, but she didn’t find any reason to worry because, as she says, the farmers went to Mendiola to remind “Ma’am Cory” of her promises. “Hindi kami pumunta dun para maghanap ng gulo.”

“No, there were negotiations. Everyone stood still, trying to listen to what was being discussed. I also saw my husband in front, and he was also paying attention to the negotiations.”

Then the bullets started to fall. At first it was like a gentle but deadly drizzle that soon turned into a monsoon rain. Nanay Tess tightly wound her hand around her mother’s own and ran.

“Everyone was running, running every which way. All I could think of was getting to Lawton where the caravan vehicles were; that and returning to my children. I didn’t know what happened to Danilo, I didn’t see if he was able to run or get away. I was crying as I ran and I didn’t immediately notice that my mother and I were both barefoot. The streets were littered with slippers and bags and streamers and placards. People were yelling, but I didn’t know if it was in pain or in outrage,” she says.

Nanay Tess herself felt rage when she saw, even as she ran for safety, that there were “owner-type” jeeps driving alongside the protestors who were scurrying for safety. “They were shooting at us, at everyone who was running!” she says, anger in her eyes, in her voice.