Hacienda Luisita Case Should Be Tackled in GRP-NDF Talks — Farmers

“Agrarian reform is the main content of the socio-economic reforms embodied in CASER,” the NDF’s Luis Jalandoni said, referring to the Comprehensive Agreement on Socio-Economic Reforms that is the second substantive agenda in the negotiations. “Through genuine agrarian reform, we shall break the land monopoly of a few big landlords and implement free land distribution to our landless farmers and everyone who is willing to till the land.”

MANILA — Bring the issue of Hacienda Luisita to the negotiating table.

This is the call of peasant group Kilusang Magbubukid ng Pilipinas and its allies Pambansang Lakas ng Kilusang Mamamalakaya ng Pilipinas (Pamalakaya), the peasant women federation Amihan and the Unyon ng mga Manggagawa sa Agrikultura (UMA) to the respective peace panels of the National Democratic Front of the Philippines (NDFP) and the Government of the Republic of the Philippines (GRP).

OTHER STORIES
* In Oslo, Possibilities for Peace Despite the Odds
* At Start of Talks in Oslo, Reds Insist Manila Violated Agreements
* ‘Ka Bart’ Is Member of NDF Peace Panel, CPP Reiterates

The KMP and its allies released a manifesto addressed to both panels and their respective heads , the NDFP’s Luis Jalandoni and the GRP’s Alexander Padilla, saying the issues involving the fate of farmworkers in the sugar estate owned by the family of President Benigno S. Aquino III should be discussed in the peace negotiations in Oslo in February.

Peasants insist that the Hacienda Luisita case is an issue of social justice. (Photo by Clemente Bautista / bulatlat.com)

KMP secretary-general Danilo Ramos expressed certainty that the peace panel for the NDF will bring up the Luisita case as it is covered by the second substantive agenda of the talks, the Comprehensive Agreement on Socio-Economic Reforms (CASER). He based his assertion on consistent declarations of the NDFP regarding the necessity of addressing socio-economic concerns as one of the means to pave the way toward a just and lasting peace in the Philippines and ending conflict.

“There are two important points that must be considered when we speak of social and economic reforms. The first of these points involves the question: for whom shall the reforms serve?” Jalandoni said. “The reforms must address the social and economic problems of the great majority of our people who for centuries have been at the receiving end of the brutalities that come with poverty and backwardness as well as with the violence that poverty and backwardness inflicts. These are our farmers, workers, indigenous peoples, urban poor, and fisher folks. We believe that only by decisively addressing their problems can we pave the way for achieving a just and lasting peace.”

Jalandoni also said genuine agrarian reform must be implemented to resolve the country’s problems and to serve the end of social justice.

“Agrarian reform is the main content of the socio-economic reforms embodied in CASER. Through genuine agrarian reform, we shall break the land monopoly of a few big landlords and implement free land distribution to our landless farmers and everyone who is willing to till the land,” Jalandoni pointed out.

“Free land distribution is the cutting edge of the social justice of CASER since it immediately gives our farmers control of the land in the concept of ownership and directly liberates our farmers from any burden or exaction. It complements the breaking up of land monopoly in cutting all socio-economic relations that serve as instruments for landlord and merchant exploitation and oppression of our farmers and agricultural workers. It will enable our farmers to concentrate their resources and income toward increasing their productivity, satisfying their basic needs and, in so doing, raising their living standards,” he explained. 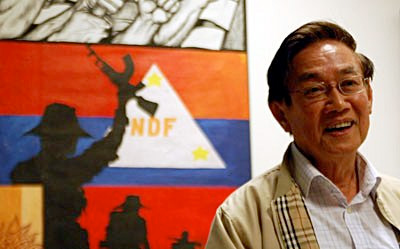 “Jalandoni is expected to bring this social justice issue in the name of landless farm workers of Hacienda Luisita, but in the case of Atty. Padilla, that remains to be seen,” Ramos said. The KMP leader said it would be hard for the GRP panel to evade the issue of Hacienda Luisita even if the case is still pending in court.

Last year, the Supreme Court began hearing the Luisita case. The Hacienda Luisita Inc. (HLI) management pushed for a compromise deal, but the farm worker beneficiaries refused. A referendum on Stock Distribution Option was also proposed by HLI management but this was also rejected by Luisita farm workers.

Ramos insisted that how the Hacienda Luisita case will be settled will have tremendous and life-changing impact on the lives of 10,000 farmers and their families. “Both panels should see the importance of the issue. In its statements delivered to the media, the NDF has already declared support for calls that the land be given to the farm workers. As for the GRP panel, it’s a big question how it will respond to the call, given that it’s representing the Aquino government, the head of whom has a personal and economic stake in Luisita,” Ramos said.

In the meantime, Ramos shared that farmer groups from different countries in Asia like India, Bangladesh, Pakistan, Nepal, Sri Lanka and Malaysia are also in support of the KMP’s campaign for the free distribution of the Aquino-Cojuangco sugar estate to farm worker beneficiaries.

Ramos also stands as the concurrent secretary-general of the Asia-wide peasant formation Asian Peasant Coalition. The coalition is set to hold its third general assembly in Sri Lanka next week, and it expects to approve a resolution demanding the outright and free distribution of the 6,453 hectare sugar lands to 10,000 farm worker beneficiaries.

Besides the Hacienda Luisita case, Ramos said that NDFP and GRP peace panels should also discuss other big cases of agrarian disputes, among them the case of Hacienda Yulo involving 7,100 hectares in Calamba, Laguna, the 10,000 hectare land dispute in Hacienda Looc, Nasugbu, Batangas and other agrarian reform reversals in Cagayan and Isabela provinces, Eastern Visayas, Panay, Negros and Mindanao islands.

Next week, Luisita farmers will file a motion for the speedy resolution of the Hacienda Luisita case. They will conduct a 20-vehicle caravan from the Department of Agrarian Reform national office to the SC offices in Taft Avenue in Manila to press the high court to resolve the land dispute in favor of Luisita farm workers.