The Human Rights Summit: Will It Put a Stop to the Killings?

Even though it was hailed by various sectors in society as historic and unprecedented, human rights advocates doubted if the human rights summit initiated by the Supreme Court would be enough to curb the festering problems of extrajudicial killings and enforced disappearances. 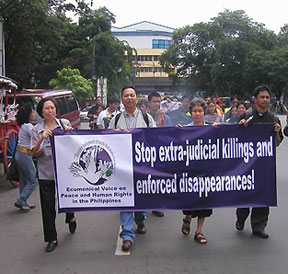 While a human rights summit was on its second day at the Manila Hotel, another activist in Tacloban City was felled by an assassin’s bullet. Charlie Solayao, vice-chairperson of the urban poor group KADAMAY-Tacloban chapter (Kalipunan ng Damayang Mahihirap or Mutual Help Association of the Poor), was shot at 1:26 a.m. of July 17 while waiting for a ride to the fish port where the victim and his wife were to buy fish for selling at the public market.

From Jan 2001 to May 31, 2007, the human rights group Karapatan (Alliance for the Advancement of Peoples’ Rights) has documented 869 cases of extra judicial killings and 180 cases of enforced disappearances since Pres. Gloria Macapagal-Arroyo was put to power in 2001. In its statement delivered at the human rights summit, Karapatan chairperson Dr. Edelina dela Paz, said the most number of killings per year have occurred in 2005 (188 cases) and 2006 (213 cases). It has so far documented 46 cases of extra judicial killings in 2007.

The top three regions having the most number of cases are Southern Tagalog (157 killed), Central Luzon (143 killed) and Bicol (122 killed). Incidentally, de la Paz said regions and provinces identified by the Armed Forces of the Philippines (AFP) as priority areas in the implementation of its current counter insurgency program Oplan Bantay Laya (OBL or Operation Plan Guard Freedom), and in the deployment of troops registered the most number of extra judicial killings.

Implemented starting 2002, OBL is the local version of the U.S. global war on terror and is ably supported by U.S. military aid and training. American troops are regularly in the country to conduct military trainings and participate in the so-called Balikatan (shoulder-to-shoulder) exercises with Filipino soldiers. “With the participation of U.S. combat forces, the Arroyo administration conducted a dirty war against the Left,” de la Paz said.

By 2006, the Arroyo government intensified the implementation of OBL through its Enhanced National Internal Security Plan (NISP) which was aimed at decisively defeating the communist insurgency in 2010, the same year Arroyo will be finishing her term. To expedite its implementation, the Arroyo government allotted an additional P1 billion ($22,321,428 at an exchange rate of $1=P44.80) for counterinsurgency in June 2006.

Internal military documents obtained by Bulatlat in 2006 would, however, show that the OBL also targeted unarmed civilians who are members of progressive organizations which the AFP classifies as “sectoral front organizations” of the Communist Party of the Philippines (CPP) and its armed wing, the New People’s Army (NPA). Numerous individuals and organizations have been labeled as “enemies of the state” and were listed in “sectoral Orders of Battle” (OB), making them “fair game” for overt and covert military operations, de la Paz said.

Prof. Luis Teodoro, deputy director of the Center for Media Freedom and Responsibility (CMFR) and member of the Freedom Fund for Filipino Journalists (FFFJ), said the killing of journalists is eroding press freedom and the media’s essential role in a democracy.

In a study conducted by the CMFR in 2005 and 2006, Teodoro said they have documented 33 killings of journalists that were “in the line of duty” while there were 20 other cases of killings “for reasons not connected with their work.” Except for a few, Teodoro noted that all victims were community journalists or provincial radio block timers who were not working for big media establishments.

Of the said cases, only 27 have been brought to court. Eleven are pending investigation, five are under trial, five have been dismissed, four are pending prosecution while only two have been successfully investigated. Court records would show that some of the suspects are connected with the police, military or the local government.

Meanwhile, the National Union of Journalists of the Philippines (NUJP) was disappointed because they were not invited to the human rights summit to represent he media sector. NUJP has been at the forefront of the “Stop Killing Journalists” campaign which started in 2004. (see NUJP statement)

“The AFP and the government have been accused of complicity if not actively engaging in the killing of unarmed activists,” Esperon said in the opening of his speech. “The AFP never had or will never have a policy of deliberately targeting civilians including those who may have a different orientation from our government for as long as they confine their struggle to legal and parliamentary means,” the chief of staff added.

Esperon said the CPP-NPA is the country’s “primary security threat.”

“They (CPP-NPA) have accused the government of perpetrating the killings which they themselves have done,” Esperon told the summit.

Esperon also accused Karapatan of acting as “fault finders interested in their own political agenda rather than resolving the issue of helping the victims.”

Calderon said not all the killings that they have documented were politically motivated and not all cases were perpetrated by the military or police. Of the 116 cases involving activists and unarmed civilians documented by the PNP’s Task Force Usig (TFU), which was formed by the Arroyo government to investigate cases of extrajudicial killings, Calderon said 25 cases have been perpetrated by the NPA and only six cases involved military men.

Of the 836 cases documented by Karapatan, Calderon said, only 122 are included in the TFU list while another 125 cases are undergoing investigation.

For cases involving slain journalists, TFU documents show that 27 of those killed were due to work related incidents; 21 of these cases have been filed in court while six are under investigation. Of these, the military have been involved in only two cases, the police in three cases and the NPA in one case. The PNP said they have arrested 13 suspects.

Calderon specified a number of problem areas that have hindered the police from solving these cases. These are: 1) reluctance of the families of the victims to come forward for fear of reprisal; 2) low budget of the Department of Justice (DoJ) Witness Protection Program (WPP); 3) Limited investigation facilities like forensic mechanisms. In this case, the police rely only on testimonies of witnesses who would later disappear due to fear of reprisal; 4) lack of appropriate training for police investigators; 5) lack of funds for the reward system; and 6) responding to remote and insurgency infested areas.

DoJ Sec. Raul Gonzalez, who also spoke during the summit, echoed the PNP’s statement that the WPP lacks funds. Gonzalez said other problem areas include: 1) the courts lack 800 prosecutors and 900 lawyers for the Public Attorney’s Office (PAO); 2) the unorganized courts; 3) the failure of some courts to conduct continuous trial; 4) limitations of the Rules of Court; and 5) the difficult balance between due process and expeditious justice.

Human rights lawyer and Karapatan counsel Rex Fernandez chided both the police and army chiefs for showing no remorse for the countless victims of rights abuses. He said that while Calderon’s report to the summit only focused on debunking Karapaan’s documentation on the number of cases, Esperon, on the other hand, was still in a state of denial. “They just evaded the issue (of political persecution) but their statements did not answer the problem,” Fernandez said.

Will the killings stop?

Fernandez said the holding of the summit for the first time was a victory of sorts for human rights advocates. He noted that Karapatan’s report was extensively quoted in the SC’s overview. But its success, Fernandez said, does not mean that the summit has arrived at a solution to the escalating problem of human rights abuses perpetrated by state agents.

“Good thing that it exposes the issue but the summit does not have teeth,” Karapatan’s counsel said. “As the summit proceeded, the attacks on human rights proceeded as well.”

As long as the government’s anti-insurgency campaign targets unarmed civilians, “the summit can only find ways to give redress to the victims and their families, but the killings won’t stop” Fernandez said.(Bulatlat.com)